xgboost is the most famous R package for gradient boosting and it is since long time on the market. In one of my publications, I created a framework for providing defaults (and tunability measures) and one of the packages that I used there was xgboost. The results provided a default with the parameter nrounds=4168, which leads to long runtimes.

Hence, I wanted to use the data used in the paper to set nrounds to 500 and optimize the other parameters to get optimal defaults.

I used the same method as mentioned in the paper with the 38 classification datasets and obtained the following (rounded) defaults:

Now I wanted to know how well this defaults perform on other tasks. So I took a collection of 29 regression tasks of different domains, that I collected from different sources such as OpenML and compared my defaults against the defaults of xgboost with nrounds=500. Code can be seen here. 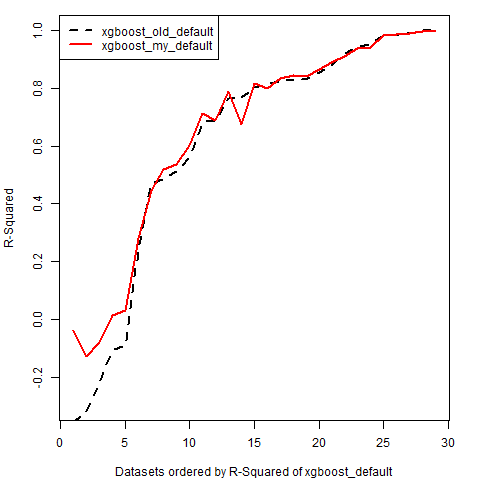 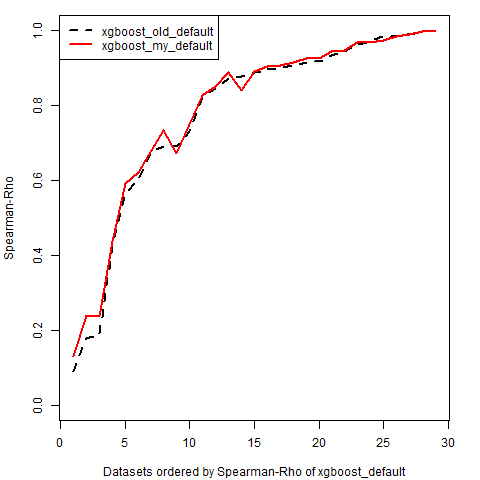 It is visible that my defaults perform better than the package defaults in most of the cases regarding the R$^2$ and also regarding Spearman’s Rho (a nonparametric measure).

The average values can be seen in the following table:

The percentage of datasets where my new defaults are better than the old defaults is 66% for R$^2$ and 75% for Spearman’s Rho.

So all in all my new defaults do not provide a very big performance gain (on average 0.03 or R$^2$), but seem to be better than the package defaults.

In my paper I could get an average improvement of 0.029 in AUC for the classification datasets with my defaults. Also not a very big difference, so this is not very surprising.

The runtime was a bit longer with my defaults, but not really much longer. You can see the runtime below: 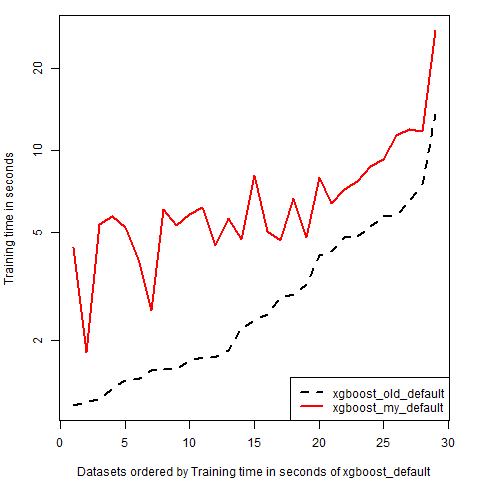 The longer runtime is mainly due to the max_depth parameter, which I set bigger (11 instead of 6).

All in all the datasets that I used were rather small, so bigger datasets would provide more interesting results.

In my next blog entry I will talk a bit about catboost and lightGBM. Especially the first one promises to provide much better default performances than xgboost and I will compare it with the random forest implementation ranger and the support vector machine implementation liquidSVM in their default state.

I thought again about the results. Some conclusions regarding the parameters: